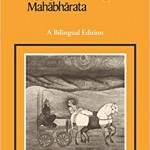 “Armed with the their (the sage’s) knowledge you will no longer fall victim to confusion, and through it you will see the all creatures without exception within yourself and then within me. Even if you are the worst criminal of them all, you will cross over all villainy, with just your lifeboat of knowledge.”  Chapter 4

Krishna tells Arjuna that the message of “imperishable Yoga” that Arjuna is receiving is something that he has told of old to Vivasvat, the ancient sun god, who transmitted to Manu (his son, the lawgiver) who in turn told it to Iksvaku.  Arjuna is surprised to hear this – how could his friend, who was born in his lifetime, have “propounded it in the beginning” so long ago in the days of Vivasvat? Krishna fills in the picture for Arjuna, that he has known many births – and so has Arjuna. The only difference is that he, Krishna, remembers them.  But there is more:

“Whenever the Law languishes, Bharata, and lawlessness flourishes, I create myself.”   He goes on to say that he comes into existence to rescue the god and to destroy evil, in order to reestablish the Law.  (lines 5-10)

“I have created the society of the four classes with due regard for the various distribution of the gunas  and the range of their workings: know that I man its author, and that I am forever without karman. Actions do not stick to me, for I have no yearning for the fruits of my actions: he who understands me in this way is himself no longer bound by his own actions.” (line 15)

After lines 15 Krishna returns to the question of action.

“If one engages in an act while forgetting about its fruit, being already fully satisfied and in need of nothing, one does not insure karman at all.”

To act disinterestedly, he says, is to act sacrificially: what we can learn from sacrificial acts is the meaning of disinterested action.  There are many different ways in which sacrificial actions might be made: “There are yogins who regard sacrifice as offered up to deities, others offer up sacrifice by sacrificing into the fire that is brahman. Others offer the senses of hearing and so forth into the first of restraint…Others again offer up all the actions of the senses and those of the vital faculties into the wisdom-kindled fire of the yoga of self-restraint.” (lines 25-30)

Sacrifices of knowledge, Krishna says, are higher than those of substances: for all action culminates in knowledge. (lines 30-35)

And in one of the most extraordinary lines of the book so far, Krishna says

“Armed with the their (the sage’s) knowledge you will no longer fall victim to confusion, and through it you will see the all creatures without exception within yourself and then within me. Even if you are the worst criminal of them all, you will cross over all villainy, with just your lifeboat of knowledge.” (lines 35-40)

Krishna proclaims that his purpose in entering existence from eon to eon is to save the good and destroy the evil, so as to maintain the Law.  And yet he says that he acts without regard for the fruits of action – disinterestedly. And he urges Arjuna – and anyone else who listens to this wisdom – to do the same.  (e.g. lines 15-20)

Krishna acts with a purpose yet without a purpose – and so is the one who would yoke themselves to Krishna.  Let’s unpack this and try to understand what Krishna is saying here.

We can move past this apparent contradiction as soon as we see the different kinds of aims involved. Krishna acts with the higher purpose to support the world, and ‘save’ the good; but he is not interested in particular outcomes. It is difficult to immediately see how this might work in our everyday life – since the teaching cuts against the grain of our normal ‘interested’ mode of behavior.

Someone brought up learning as one way to think about this idea. We might be undertaking a course of learning (like this one) without certain expectations for future attainments (like degrees, awards or honors). The intention is to learn for the sake of itself.  And even more, learning has to be disinterested, that is, we have to move beyond the expectations we might have had (for example, of what an “eastern” book is going to say about the big questions of life.)

In the course of the conversation, two contrasting views of Krishna’s vision thus far has come to light. One view sees Krishna as a master chess player in a game of chess, and all of us are the pieces – Kings, Queens…pawns. His message, on this reading, is to play your role and don’t ask questions. Be a pawn. This makes one extremely uncomfortable because what if the role one plays involves enslavement or worse?  This view raises the understandable concern about the source or legitimacy of authority and our relationship to it.

Another view is that the knowledge Krishna is speaking of (lines 35-40) is in some way ‘beyond good and evil’. (This reading is supported by the line that says that even the most hardened criminal can be liberated from karman through knowledge. ) It is as if Krishna is saying: look at the way the nature works without compunction. Crabs, for example, will eat baby turtles on a beach. This may upset us, but from the perspective of nature, it is not evil.

This knowledge, moreover, is one in which a person sees all creatures in them – and in turn in Krishna. (35-40) Thus, to return to the first analogy – a slight alteration is needed to make it fit with the text. Suppose we are indeed but mere pawn in a grand game of chess. If we have true insight, then, as a pawn, we would see all the pieces in ourselves – the white and black Kings, Queens Knights, Bishops, Rooks and other pawns – and in turn all within the master player himself.  What difference does this slight alteration make?