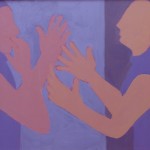 We received this little memoir from a participant of seminars at Symposium San Francisco, 2006-2009, and decided to share it with you, our readers.

“…and the librarian, who was 90 years old and bundled up in 3 sweaters and sitting there at the reference desk supposed to be helping the public all the while a Stephen King novel is opened for all the world to see, she starts giving me this big lecture about how Fiction–“

“About how Fiction is shelved alphabetically by the author’s last name. ‘And if you cannot find Balzac’s works, sir, it is not because the library does not have any–on the contrary: They’re under D for de Balzac, not B: you were simply looking in the wrong place.’ I thought, Good God, how tedious! But I would have done the same thing and did do the same thing when I worked at the library in Burlington. These jobs give you a petty power you get drunk on. But what I started to say was, Balzac drank 17 cups of coffee every day and died of caffeine poisoning–“

“Matthew, we have to talk.”

“–and when he was writing, which must have been constantly; I mean, Jesus Christ, the guy wrote 95 novels and left 45 unfinished; I mean, can you imagine the bump on the side of his middle finger from holding the pen? You see, he had this whole theory about ‘digestion–‘”

“He believed that the blood sent to his stomach to digest food was blood that could have been sent to his brain to help solve a plot problem and keep his story going, so when he was hot on the trail of a story he ate only some sardines mashed in butter at 9 in the morning–and that’s after writing all night–or maybe a cold chicken wing, or maybe a pear, and then off to the percolator for 2 more cups of cafe noir–God, the guy must’ve had a cast-iron stomach to always drink it black! But when he had told the story and sent the finished proofs to his publisher, he beelined to a certain restaurant and ordered 100 oysters–can you imagine all the shucking in the cellar? Remember the 60 Erik ate at our wedding and what a pile the shells made? Well, imagine 40 more! He’d wash down those 100 oysters with 4 bottles of white wine. Then came a roast lamb. Then a ‘brace of partridges.’ Then a whole baked fish. Dessert was God knows what kind of fancy tart or gateaux or pate brisee fine, but he preferred Cormice pears, which he ate by the dozens (note the plural). He would wipe his mouth on the cloth napkin, stand up from the table, smooth his hand down the front of his silk shirt tucked into his pants, and say, ‘Garcon, send the bill to my publisher!’ That’s balls, huh. He’d eat all that and say,  ‘Garcon, send the bill to–‘”

“Matthew, you’re not in Symposium anymore–you have to get a job!”

“Yes, by and by Wage Labor has come a-knocking at my door–and oh I don’t want to answer! I don’t know about you but now that I finally have a house, damned if I want to leave it. Days pass when I don’t step outside and happily write my way through Dubliners (I’m in the middle of “A Painful Case”). Then the last drops of milk drip from the cardboard spout, the last nub of toothpaste comes up out of the tube, the last section of toilet paper comes off the roll, and like it or not I have to stop writing and leave the house and go to that awful place called Out. And it is bad enough watching the shelf stocker, the floor sweeper, the barcode zapper, the courtesy shuttle driver, the school crossing guard, the Parking Regulations Enforcement Office, the waiter, the waitress, the coffee pourer, the bagel slicer, the gas pump jockey; it’s bad enough watching them and then, horribly, it’s me behind the counter wearing the name tag pinned to the company logo shirt, it’s me going through the required spiel of reminding the customer to check out the many online specials and discounts. But that doesn’t upset me half as bad as this goddamned music that’s blasted from every speaker in every ceiling tile in every store you go into! Oh to imagine how exhausted I would be to return after 7.5 hours not of doing the same thing over and over again but from having to fight against 80s Classic Rock! “Let this inspire you,” I tell myself. ” Let this be what breaks you through!”  Well, since John Simon Guggenheim said no; since I’ve entered my memoir in all the contests I can enter it in; since Dr. Tracy McMullen, Ph.D., our old friend and recent house guest from West Hollywood, California, said that never had she enjoyed listening to anyone read stories aloud like when I do and why don’t you read books aloud for a living–this is the newest straw I’m grasping at. But what half-hearted grasps. “All I want to do is just sit on my ass and think about Dante,” Samuel Beckett said when he was 49. This year I turn 50. Change it to “James Joyce” and there I am.