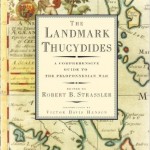 The weather had significantly improved since last week’s frosty interlude, so it was a welcome reunion for the group, as we gathered at the Hops House along the river at the San Antonio Museum of Art.  Several people brought bottles of wine – so we poured libations to the Muses, to those who were not able to join us tonight, and to the Corcyreans and Corinthians (and, as it turned out, the Epidamnians, who seem to have bee forgotten.)

Our reading for the evening was Book 1. 32 through 1.45, which focuses on the rival speeches by Cocyreans and the Corinthians, as they presented to the Athenians.

We are still in the moments leading up to the outbreak of the Peloponessian War.  In the previous section we discussed, Thucydides points to two causes – the immediate causes of the war, and the real cause, which was “formally kept out of sight” – that is, the fear of growing Athenian power.

As we study this particular section, which appears to be giving an account of the immediate causes of the war, we must bear both of these causes in mind.

Tensions were running high and the Corcyreans had come to Athens beseeching the great city for help in a conflict the tiny colony faced with the Corinthians over the city of Epidamnus (For the full account, read 1.24-1.30). After the Corcyrean’s present their case, we hear the Corinthian opposing speech, warning against a decision that could jeopardize the balance of power and the preservation of peace.  The Athenians deliberate, and at first side with the Corinthians; but then public feeling changes, and they switched to the Corcyreans – but they try to adopt a compromise position, where they vowed n0t to get involved with any actual fighting, but only to provide ten ships.

We opened the session by discussing the account Thucydides provides (1.24-1.30) about the conflict between Corcyra and Corinth.  We also spent just a brief amount of time looking at a map of the region (Strassler, Map 1.26), just to get a sense of the geographic location of the two cities. A number of things were striking. Epidamnus is far north along the western coast, and Corcyra, which is situated some distance south, is an island. They are both at least several hundred miles away from Corinth – and the path is certainly not a easy one between the two cities. Corinth is also coastal – which would make sense for a naval power.  We see Delphi situated between the two cities.

After our brief orienting discussion, two volunteers from the group read each of the speeches, the Corcyrean and the Corinthian.

For the opening question, we followed the principle Thucydides appeared to be laying out for us in the prior readings – that we engage the speeches as if we were to make the decision for ourselves. Suppose we did not know what the Athenians yet decided.  How would we decide or judge this matter?  Would we side with the Corinthians or the Corcyreans?

Conversation always take surprising turns. Our conversation turned almost at once to what is not discussed in either speeches – a very interesting approach.  One thing is Epidamnus – which seems to have been lost in the conflict between the two city-states, and the larger growing conflict between the Athenians and Spartans. We also noticed that the Spartan fear of growing Athenian power appears in neither speech.

As we sorted out the two speeches, someone ventured the suggestion that the Corcyreans were making the argument of expediency or self-interest to the Athenians, whereas the Corinthians appeared to being arguing more from the vantage point of justice. The Corinthians argued, for example, that the Corcyreans were criminals in this case, and that the Athenians should turn away from this injustice:

Abstinence from all injustice to other first-rate powers is a greater tower of strength than anything that can be gained by the sacrifice of permanent tranquility for an apparent temporary advantage.(1.42)

The Corcyrean action was not only criminal, breaking the laws of Hellas, but they also were base, thinking only of temporary gain. The Corcyreans were motivated by a base love of profit, according to the Corinthians.

As we examined Corinthian position more closely, however, we saw some details that shook our faith in such a clear and simple reading of the Corinthian speech; or at least, suggested that their position was more mixed with appeals to both justice and self-interest. For example:

If you make it your policy to receive and assist all offenders, you will find that just as many of your dependencies will come over to us, and the principle that you establish will press less heavily on us than on yourselves. (1.40)

Clearly an argument of self-interest, that a precedent Athens sets by lending support to rogue Corcyra might prove to their own detriment.

After sorting out our impressions of the two speeches, comparing it with what we knew from Thucydides own account, and what the Athenian decision finally was, a question was raised about what might have happened if Athens had sided with Corinth instead of Corcyra.  This led us directly to the question about the inevitability of the war.

Thucydides himself had already stated earlier in the book that the war was inevitable.

The growth of the power of Athens, the alarm which this inspired in Sparta, made war inevitable.

In their speech to the Athenians, the Corcyreans appeal to the feeling that it is only a matter of time before war breaks out – hoping to provoke the Athenians into calculating self-interest.

If any of you imagine that war is far off, he is grievously mistaken, and is blind to the fact that the Spartans out of fear of you want war, and that Corinth is influential with them – the same, remember, that is your enemy, and is even mow trying to subdue us as a preliminary to attacking you. (1.33)

Remarkably, the Corinthians deny the inevitability of the war.

The coming of the war which the Corcyreans have used as a specter to persuade you to do wrong, is still uncertain, and it is not worthwhile to be carried away by it into gaining the instant and declared enmity of Corinth. (1.42)

We spent some time reflecting on what might be at the bottom of a widespread feeling of the inevitability of war, relating it to our own experiences. (We think Thucydides implicitly supports this sort of reflection with his claim to be writing for “all time”.)

Now when the Athenians weigh the matter of the Corcyreans and the Corinthians, they were first inclined to support Corinth; but then public feeling changed. As Thucydides recounts,

It began now to be felt that the coming of the Peloponnesian War was only a question of time, and no one was willing to see a naval power of such magnitude as Corcyra sacrificed to Corinth; though if they could let them weaken each other by mutual conflict, it would be no bad preparation for the struggle which Athens might one day have to wage with Corinth and other naval powers. At the same time the island seemed to lie conveniently o the coasting passage to Italy and Sicily. (1.44)

On this basis of this, Athens then receives Corcyra into alliance.

We didn’t have time to explore the implication of this alliance – but what are they? Does it appear as though Athens has also decided this case according to self-interest, and not justice and nobility? Was the Athenian inclination toward Corinth on account of the justice and even nobility of their case — and did the public feeling about the war push Athens to self-interest?  But we should test it even further – was this decision as ‘base’ as Corinth claimed it would be?  Would Athens be able to free itself from a charge of reacting to immediate interest and love of gain? Was this base choice or a noble one?

We were just warming up, it seemed, when it was time to end the discussion for the evening. But, as I like to say, it is often a good thing to leave the table hungry for more!

Continuing our conversation in the Greek art gallery, we examined two pieces – one very small and one very large.

The first piece we examined was a black-figure aryballos from Corinth, dated about 150 years before the events related in Thucydides’ book. You might not tell from the picture below, but the oil flask is quite small – only a few inches in diameter.  This piece helped to fill out a small detail of Corinth’s culture – the city in contention with Corcyra in our reading.  Notice that Corinth invented the striking black-figure style of imagery on pottery, a style we see all over the gallery with kraters and flasks over several centuries – and we see it in the next piece. 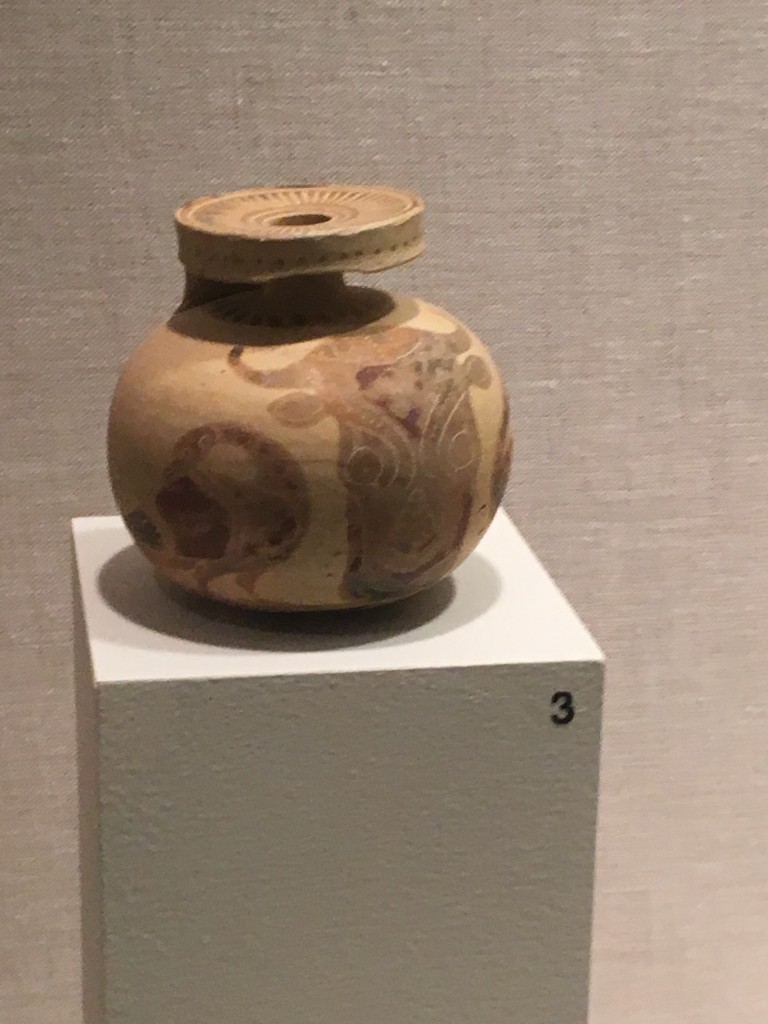 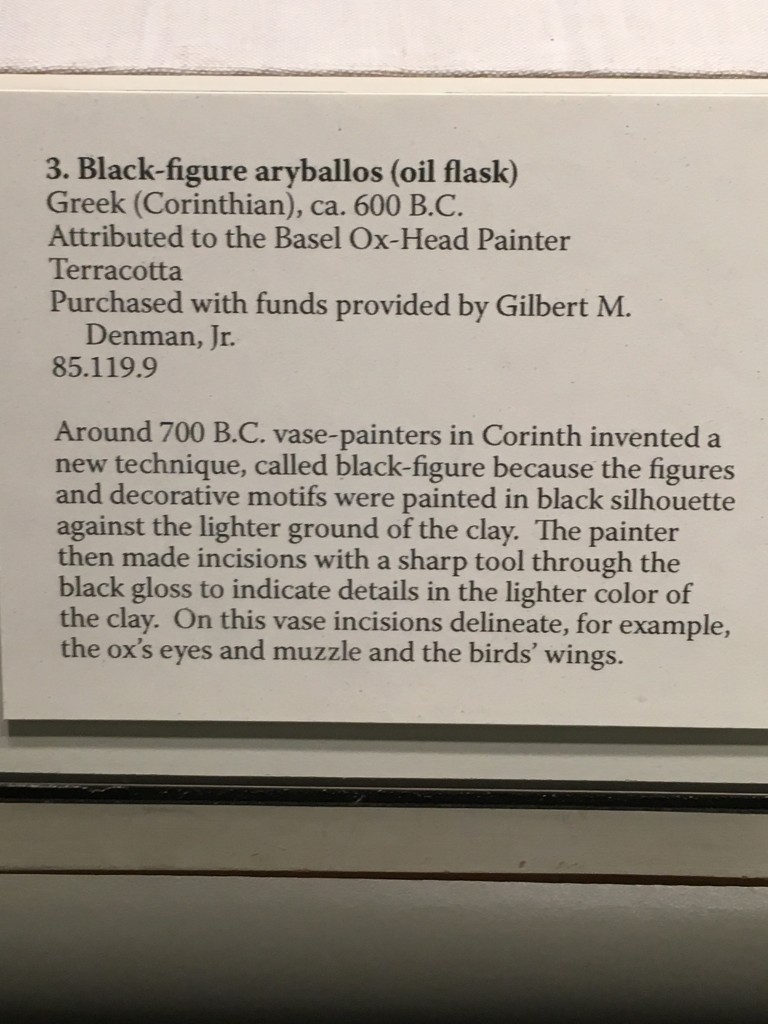 After we spent some time with the black-figure aryballos, the second piece was a black-figure column krater (bowl for wine and water).  A very large vessel holding ten gallons or more of liquid! 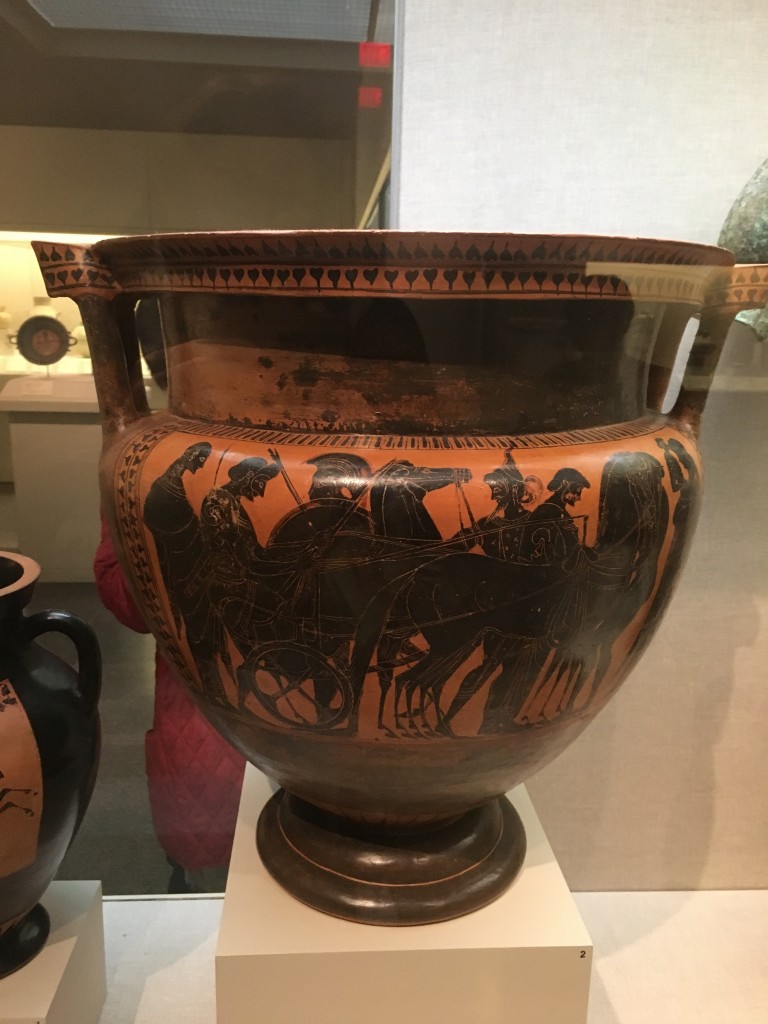 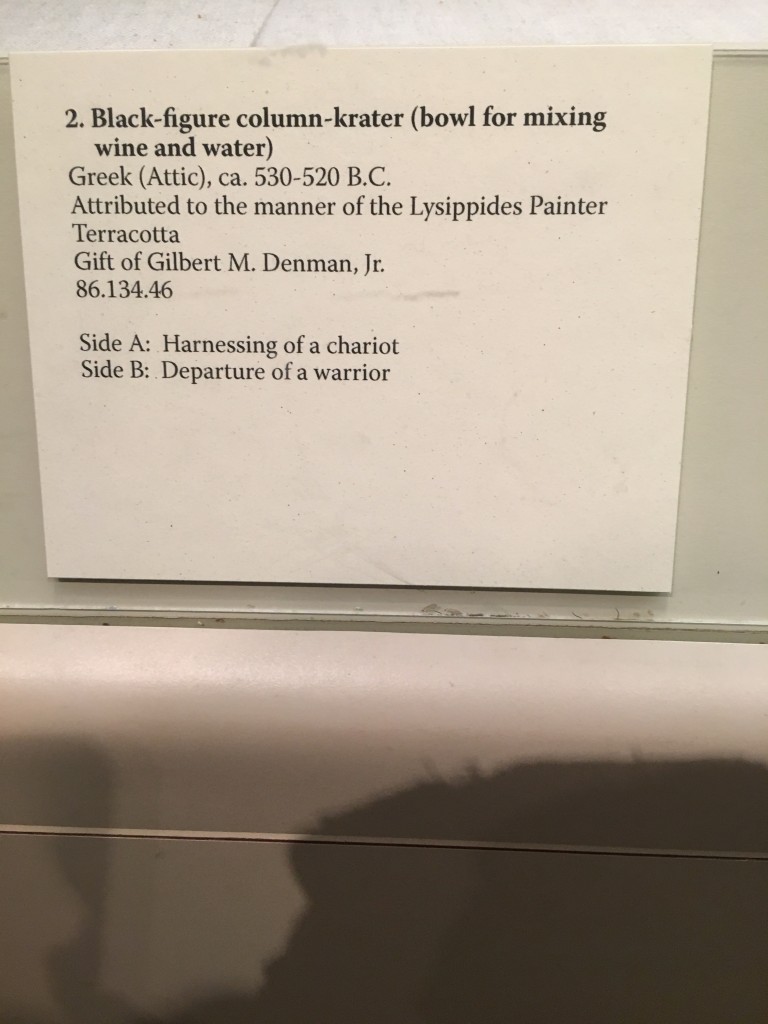 Some of us thought we might make good use of such a vessel in our Symposium gatherings – given our evenings libations, and the fact that Symposium’s name, derived from Plato’s Symposium, refers to a drinking party where people share speeches and talk late into the night.

The scene depicted above is one of arming for war and a farewell. A better picture than this one would show the figure on the right – which is a mother holding her child, and the figure on the left is, we thought, the father.

We felt that this scene is somehow appropriate for the vessel. And we wondered about the human significance of such a scene. We do know from works such as Homer’s Iliad – reflecting in particular on the touching farewell scene with Hector, his wife Andromache and his little son – that the Greeks did not merely romanticize warfare, but also felt the longing for home, and the sorrow of a farewell which may be final.  As we gazed upon this piece, several among us had stories to tell – personal recollections about leaving for war, or about receiving wounded warriors back home.  This process of sharing stories reminded me of a wonderful book called Achilles in Vietnam about the healing power of stories, especially as it can be used to heal combat trauma. I cannot recommend this book too highly for those interested in the healing power of stories.

Next week, we will take on speeches by Corinth, Athens and Sparta – Corinth complains about Athenian aggression after Potidaea 1.68-1.88, page 38-49. (1.46-1.67 provides the background leading up to this confrontation).