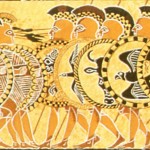 And that I feel unsettled and unsure about the dilemmas presented in his history makes me all the more unsettled.

If I was a Spartan hearing the angry and shaming speech of the Corinthians alongside the nuanced but brutal one of the Athenians, I would want most of all more information and more time.

But wait, I’d want to say, who started what with where over when?  No time.  Vote.  And there I see my lack of opinion both excludes me from decision and casts support towards whatever is decided.  It’s a little scary.

If we accept our historian’s conclusion on the start of the Peloponnesian War, that the true cause of the war was never “formally” mentioned (1.23.6), what are we to think of the actually stated reasons at the time?  I get fatigued by the thought alone of how many outlooks there must have been on its start–each opinion, tethered to something unspeakably violent or unfathomably kind.  How confusing it must have been to see!  How immovably certain would have been each invested party!

I would bet that a confusion like this unsettled Thucydides before the war even started.  He obviously wanted the who, what, where, and when—actually true answers, uncorrupted by malicious bias or faulty memory.

And as Óscar pointed out during the first seminar, Thucydides applied the empirical style of thinking used in the Greek mathematics and natural science of the time to human actions. The historian’s recognition of the problems in gathering data lends to his credibility.

Since Thucydides roots his inquiry ultimately in “trust” (1.1.3) that his compiled evidence accurately depicts the events of the past, he must have been aware that his readers could also only lend their trust in him, the writer.

Yet I cannot find this trust a solace, and Thucydides makes no attempt to placate.  Openly he states his work is not to win awards, but rather to serve as some sort of how-to manual for people in troubling times.  But even that description misses the mark.  Thucydides poses dilemmas in the form of speeches and states the subsequent reactions to them without stating a preference for what should have been.

It is no how-to, but maybe more a what-to-look-for.  This is not so much a compilation of specific warnings to watch out for when Corinthians mention the golden rule (1.42.1) or when Athenians again bring up their victory at Marathon.  Rather, Thucydides seems to have been focusing on themes which arise predictably under a given set of circumstances.  Although Thucydides must rest his depiction of historical events on trust, if his commentary on such themes proves recognizable to readers, all the more credible are the specific details.

Given the fact that our conversations have readily brought about discussion of the major wars of the 20th century and the current politics of this Trump era, Thucydides seems to have accomplished his mission.  All the more interesting do his narratives and speeches thus become, because they seem to be a key to understanding what can happen in the newspaper tomorrow.

But what continues to unsettle me is that, even if I grasp the keenest sense of the future, what should be might still not.

by Abraham Callahan, Reflecting on Tuesday evening’s seminar on January 30th 2018 (Thucydides at the Museum, 1/6-2/18)